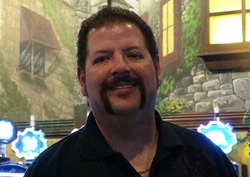 The Emerald Island Casino is pleased to announce the addition of Steve Overlay as our new Director of Food and Beverage. Steve is a multitalented individual who is a great asset to our team. He brings tremendous expertise to our restaurant and we are especially pleased because he really understands how much we value superior guest service.

Steve Overlay has over thirty years’ experience in the Hospitality Industry. He has worked in many forms of Foodservices with over ten years in private clubs. Mr. Overlay has also worked with a variety of styles of cuisines: French, Italian, Mexican, Mediterranean, Cajun, Steak Houses and Barbecue are among his specialties. He spent the last twelve years as the Executive Pitmaster for Memphis Championship Barbecue in Las Vegas. Previous employment includes working at Lone Star Steak House, the Roadhouse Steakhouse and Chevy’s in the Las Vegas area. For nine years, Steve Overlay was an Executive Chef for Club Corp of America in the Southern California region and he worked at many fine dining and dinner houses while growing up in the Denver Colorado area. Steve Overlay is the Captain of the SIN CITY SMOKERS Competition Barbecue team as well as a Professional competition cook. He was featured on the Food Network’s “CHOPPED” in July of this year. Currently he is serving as the President of the Nevada Barbecue Association.

Steve Overlay has been married for more than twenty five years and has three boys. All three boys are attending the University of Nevada at Las Vegas. We are so glad to say, “Welcome to the Emerald Island Casino Steve!”