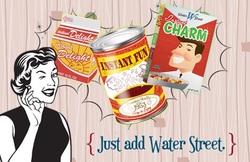 Image by waterstreetdistrict.com
Water Street District, having a rich culture and history, is the vibrant and progressive heart of Henderson, Nevada. Located just minutes away from the Las Vegas Strip, it has become one of the hottest redevelopment areas in the Southwest. With the plans, commitment, resources, and expertise of the townspeople, the district is attracting developers, retailers, restaurateurs, entrepreneurs, and customers to create and experience something new.
Water Street marked the beginning of Henderson. The basic town site developed in 1941 and became a working town for the Basic Magnesium Plant, which produced munitions for the war. When World War II ended in 1945, magnesium was no longer needed and the workers moved away. The town that was supposed to be sold as war surplus property was saved by the legislature who purchased the local industrial sites. Henderson was officially incorporated in 1953 and only totaled 13 square miles.  The Historic Walking Tour will provide customers the colorful account of the development of Henderson, from its birth to industrialization. The tour would cover the first homes, schools, businesses, and how the city became Nevada’s second largest city. Today, the Water Street District stretches from Ocean Avenue in the south to Lake Mead Parkway in the north. Businesses have emerged and progressed throughout the city over the years. Through a series of construction projects that ended in the fall of 2011, Water Street has been reconfigured. Extensive landscapes, specialized lighting and a sound system, and the narrowing of the roadway for wider sidewalks were among the additions and changes. The Henderson city officials have planned on tearing down the Henderson Convention Center and then build a new one that includes hospitality. City Manager Jacob Snow said that they are also looking to bringing more night life to Water Street. Social media sites like Facebook, where upcoming events are being posted, have even increased the city’s popularity. The Henderson Events Plaza Amphitheater, which hosts performances and concerts, is located at the center of Water Street District. The opening of the amphitheater in 2006 brought thousands of people to Water Street. It is also the venue for Henderson’s annual Art Fest. The Art Fest attracts an estimated 70,000 attendees over a two-day period every Mother’s Day weekend while the Super Run car show brings over 100,000 visitors every September. Some of the city’s annual events are the Viva Ska Vegas Music festival, National Day of Prayer, Arbor Day of Celebration, Ho’olaule’A festival, and the Parade: Henderson Heritage Days. Some of the activities, such as the Farmer’s Market, the Monday Italian Night, Military Bonus Tuesdays, Cowboy BBQ of Henderson, Art Beat live Music, and the Waterday Street Market are on the city’s weekly activity schedule. Water Street’s merchants, owners, and proprietors welcome other entrepreneurs and franchisees. Automotive establishments, dining establishments, financial services providers, photography studios, casinos, bars, and beauty parlors are just some of the many businesses that can be found in this commercial community. Some of the famous establishments in the Water Street District business spotlight are Boys and Girls Clubs of Henderson, First Financial Merchant Services, Shurtleff Family Practice, Shirtz Logoz and Promoz, Emerald Island Casino, City Lights Art Gallery, and Masterpiece Cuisine. The Downtown Henderson Recreation Center, where residents hang out and relax, has an outdoor pool, elevated jogging/walking track, warm-up and fitness area, gymnasium, steam room, sauna, showers, and a game room with GameCube, Xbox, and Playstation2. The Water Street District is also the home of casinos (Emerald Island Casino) and bars which are open for late night entertainment.