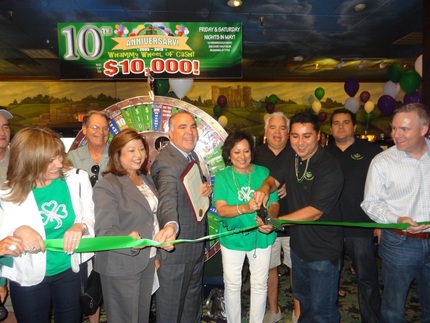 19 May 10 Year anniversary party at the Emerald Island Casino

On May 18, 2013 the Emerald Island Casino, Nevada’s only all penny casino in Downtown Henderson celebrated their 10 year anniversary. The celebration started at noon and the casino was quickly packed by patrons anticipating a great time. Festivities started with a proclamation and ribbon cutting from the City of Henderson to the Emerald Island Casino read by City Councilwoman, Gerri Schroder. The Henderson Chamber of Commerce attended in force to help celebrate the occasion. Guests at the anniversary party were treated like family. Emerald Island Casino provides Superior Guest Service and making new friends is their #1 priority! As a team, they make a personal commitment to hold themselves to a higher standard every day to give guests the ultimate experience in guest service. Complimentary coffee with Bailey’s Irish Cream was offered as soon as patrons entered the casino. Anyone who was hungry enjoyed free Texas style brisket sandwiches with meatballs, sausage and scallops wrapped in bacon. The meat was delicious because it was prepared in their new smoker. Anyone who still had room enjoyed a variety of cakes for dessert. Delicious food, drinking, gambling, colorful balloons and speeches all contributed to a great party.