A Smoking Good Time at the Emerald Island Casino 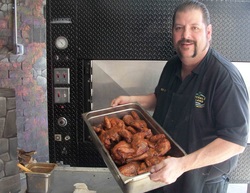 02 May A Smoking Good Time at the Emerald Island Casino

Emerald Island Casino in Henderson, Nevada is well known as the place to eat when Downtown. The Emerald Island Grille has delicious entrées like “Stuffed Clams Casino”, “Grilled Rib Eye Steak and Herb Crusted Jumbo Scallop Combination” and “Pan Seared Breast of Chicken”. Recently, a new addition has been added to the restaurant; a smoker. Steve Overlay, the Director of Food and Beverage is pictured proudly displaying a batch of smoked chicken. Steve says he is excited to be able to bring a variety of smoked meats to the customers of their restaurant. In addition, smoked meats from Emerald Island Casino will be available the first Saturday of every month at Waterday held at Downtown Henderson.
Many people confuse barbecuing meat and smoking meat. Barbecuing is the process of cooking meat over an open flame. Smoking meat is the process of flavoring, preserving or cooking by exposing the meat to smoke from burning or smoldering plant material, usually wood. The history of meat smoking goes back to the time when our ancestors lived in caves. Early man lived in caves or stone huts without chimneys. These dwellings being unventilated would become filled with smoke. Meat would often be hung to dry and people became aware that the meats became better preserved and picked up a desirable smoky flavor when exposed to this environment. Combining salt or salty brines was added to the process greatly improving the preservation of meat. Modern transportation and refrigeration made it easier to transport meat over long distance and reduced the need for the large scale smoking of meats. Soon smoking became more of a way to flavor meat instead of preserving meat. In 1939 a smoker called the Torry Kiln was invented in Scotland at the Torry Research Station. The kiln allowed for uniform mass-smoking and is considered the prototype for all modern large-scale commercial smokers. Although refinements in technique and advancements in technology have made smoking much easier, the basic steps involved remain essentially the same today as they were hundreds if not thousands of years ago. The long history of smoking meat is now brought to the patrons of the Emerald Island Casino to enjoy. When visiting the Emerald Island Casino and you see smoke, don’t run away…..run in and enjoy a great meal.