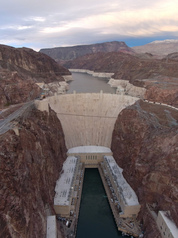 One of the greatest producers of electric power in the United States of America is the Hoover Dam. Construction for it started on the year 1931 and lasted several years. At the end of its construction, Hoover Dam was one of the largest manmade structures ever built and still one of the largest producers of electricity today in the country.The Story Behind it: During the early 1900’s, the government sought to provide a way to control the Colorado River in order to prevent springtime flooding as well as give residents in nearby towns enough water for irrigation. This was prompted by the excessive amounts of water that came from melting snow from atop the Rocky Mountains every spring. The floods engulfed settlements and farms,even breaking the canals which were built to keep the waters under control. At around 1920, an idea was drafted to create a dam which could do three things at the same time; control the flooding that happens yearly, provide irrigation for settlements and town and provide hydroelectric power for the area. Congress approved the project in 1928 and the bidding was won by Six Companies, Inc.
Construction for the massive project started in the year 1931 by the Six Companies, Inc. Boulder Canyon was chosen as the site of the construction and it was initially called Boulder Dam instead of Hoover Dam. Since this was most likely the biggest concrete structure to be ever built at that time, the construction company did not have any experience in doing so. What they did have in abundance were workers. At any one time during the construction, there should have been 5,000 workers in the site and a total of around 21,000 for the entire duration of the construction. The construction of the dam also created the Lake Mead Nationa Recreation Area. Boulder Dam Today: Twelve years after it was finished, Boulder Dam was renamed Hoover Dam, after the president, Herbert Hoover, who strived to bring its construction into reality. Today, Hoover Dam provides flood control for the Colorado River, in the sense that it can open and close the spillways when necessary. This means that flooding is not likely to happen at all unless something happens to the Hoover Dam. Some changes happened to the Colorado River Delta because of its construction. The estuarine system became an inverse estuary and some of the native species of fish there are now endangered. The power that Hoover Dam generates yearly varies depending on a lot of factors. The average power that Hoover Dam has made since its operation is about 4.2 kilowatt hour per year. The maximum amount of kilowatt hours that it has produced since the year 1940 was 10.348 in 1984 and the lowest was 2.648 kilowatt hours in the year 1956. All of the power that Hoover Dam produces is put to good use. It provides power to three states in the country, namely Arizona, Nevada and California. Most, if not all, of Arizona and Nevada enjoy the power that Hoover Dam generates. Most of Californian also gets its power from the Hoover Dam. Guests of the Emerald Island Casino can take a break from gambling, drinking with friends or after a deliciuos meal from the grille and take a short half hour drive to the dam. once there, they will enjoy one of the true man made wonders of the world.