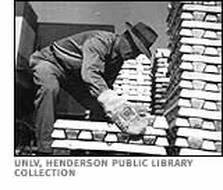 Emerald Island Casino recently celebrated its 10 year anniversary. In that 10 years the casino has become a part of the history of Downtown Henderson, Nevada. The beginning history of Henderson started with the war effort of World War II and the Basic Magnesium, Inc. Magnesium, symbol Mg with the atomic number 12, is classified under the alkaline earth metals. It plays an important part for animal and plant life here on earth. The human body requires about 0.3g of magnesium per day. The plants’ chlorophyll that is used to convert carbon dioxide to glucose contains magnesium. Magnesium is a metal element that is said to be the seventh most abundant element on earth and the eighth most abundant element found in the universe. Aside from being an essential element in plant and animal life, magnesium also played an important role during the World War II. It was called the ‘wonder metal’. Magnesium was used in alloys together with aluminum for purposes of airplane construction. In addition to that, it was used in flares and ammunitions. There is an abundance of magnesium in the seawater that is why such seawater became the source or magnesium used for bombs during World War II. Thus, with all these, it is safe to assume that magnesium became an important element during the era of World War II. Being that important, it became in demand.
Nevada Senator Patrick McCarran knew the demand on magnesium. He told President Franklin Roosevelt about such information and convinced him to fund a mining company in Nevada. Thus, the birth of Basic Magnesium, Inc. Anaconda Copper Company built the complex of Basic Magnesium in 1937 so that the Federal Government can produce magnesium. But the history of Basic Magnesium, Inc. in Henderson Nevada actually started on September 15, 1941, on its groundbreaking ceremony. The beauty about the history of Basic Magnesium, Inc. in Henderson Nevada is that the birth of Basic Magnesium, Inc. paved the way for the birth of the second largest city in the State of Nevada – Henderson. Apart from this contribution, Basic Magnesium, Inc. provided for thousands of jobs for the men and women of the area. Its growth was rapid. It came to a point wherein it produces five million pounds of magnesium per day. Come January 10, 1944, the City of Henderson emerged, named after Senator Charles B. Henderson, a former Nevada senator. By then, the company has produced more than 166,000,000 pounds of magnesium ingots for World War II. However, some time after this, the demand for magnesium decreased. By 1947, magnesium was no longer needed. Hence, the plant stopped its production and eventually shut down. After the shut down, around 1943, the United States War Asset Administration offered Henderson up for sale. United States War Asset Administration treated the city of Henderson as war surplus because of its great participation during World War II. Wanting to save Henderson, legislators evaluated the possibility of putting the administration of Basic Magnesium to the state. The legislators then unanimously approved a bill that gave the Colorado Rover Commission of Nevada the authority to buy the plant for twenty four (24) million dollars. The bill was passed and was eventually signed. Thereafter, the Basic Magnesium, Inc. plant was divided. It became privatized by the state of Nevada. It was, in the end, sold to many top American manufacturers. Later on, Basic Management, Inc. was created for the purpose of managing the assets that are used in common by the manufacturing companies. Different subsidiaries of Basic Management, Inc. were created. Until the present, Basic Management, Inc. continues  its existence.