The Life of Cocktail Waitresses

21 Feb The Life of Cocktail Waitresses 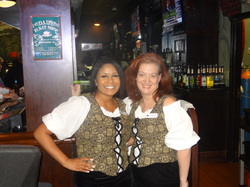 Emerald Island Casino cocktail waitresses
Everybody knows Nevada is the Entertainment Capital of the World full of leisure possibilities.  It’s colorful and vibrant imagery includes a lot of neon lights and a nightlife complete with cocktail waitresses and people enjoying themselves in bars and casinos.  The people who work in the many establishments in Nevada make the nightlife as interesting as their multitude of customers. They are, in fact, as much a part of the tourism attraction as anything else Henderson or Las Vegas has to offer.
Not much information is known as to how cocktail waitresses came to be or about who were the first ones to get hired for the job. Most of the historical accounts were from the male perspective.  What is known is that women were basically relegated to work as showgirls and cocktail waitresses in the realm of early casinos established in the Las Vegas Strip in the 1940s.  Although this role was highlighted as a way for bar owners to profit from the attractiveness of women working in their establishments, the job of cocktail waitresses has clearly evolved into one of the most lucrative occupations in the city, and even in the whole of the United States.
The first cocktail waitresses would have to be employed in the earliest bars and casinos in Las Vegas which include the establishments on the Fremont Street Experience and the Strip in Paradise and Winchester.  They are called cocktail waitresses basically because they are tasked with serving cocktails to the patrons of the bars and casinos.  Aside from making sure that the customers are served with the drinks they want, part of their responsibilities is to keep the patrons entertained – the more entertained the patrons are, the more likely they are to stay in the establishment and keep spending money while they are there.  Those who have been on the job for years have enjoyed higher pay and tips from the bar and casino patrons who are all too willing to spend their money on entertainment and customer service. Working as a cocktail waitress in a casino is really no different from any other job – you have to work hard to get good money.  Women who have what it takes to become a cocktail waitress can earn a respectable income from any of the reputable casinos in Henderson and Las Vegas. Guests of the Emerald Island Casino enjoy a fantastic gaming experience including the newest all penny slot machines, delicious food from the Grille and plenty of complimentary cocktails while they play. Central to all this is our wonderful group of Cocktail Waitresses who are at the heart and soul of the casino.