A Blast from the Past

15 Jul A Blast from the Past 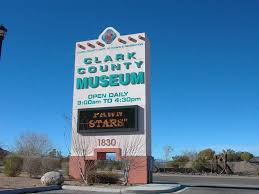 Image by keepitplanned.com
Nevada is where you can find the city of Las Vegas, which is considered to be Sin City, a city for adults and a city that teenagers and kids supposedly should not be. However, in contrast to what most people think, Nevada is also home to kid-friendly tourist attractions. One of these is the Clark County Heritage Museum, a fun place in Henderson, Nevada. Take your kids to the Clark County Heritage Museum and you will surely enjoy your day out. Clark County Heritage Museum is located along the Boulder Highway in Henderson, Nevada. When you hear the word “museum”, you might think of it as boring, dull and a place that is only for the history buffs and nerds. But Clark County Heritage Museum is actually the opposite. There are many reasons why it’s great and why you can go there by yourself or with your kids.
The museum is housed in a 30-acre compound and is a part of Clark County Parks and Recreation. Aside from the main museum that you can find at the heart of the 30-acre land, you will find other fun place in Henderson, NV. Take your kids to the Clark County Heritage Museum and witness a few of the main attractions in this park such as the Heritage Street, the Candlelight Wedding Chapel, the Esslinger Barn, and the mysterious Ghost Town and Mining Trail. 1.  The Main Museum The main museum is divided into different parts, each telling different stories about the rich culture and history of the place. One of the exhibit halls is the Anna Robert Parks Hall, which contains a collection of memoirs of Nevada across various ages. Anna Robert Parks was actually the collector of most of the items that you can find in the museum. The timeline starts from the Ice Age and ends to the modern day age. Let this exhibit hall bring you back in time when there are ancient houses, around town, up to the time when Las Vegas has become The Entertainment Capital of the World. One of the items displayed in this hall is actually a Dewy slot machine that was collected in the 19th century.  The Heritage Gallery, on the other hand, showcases the creativity and artistry of Nevadans. 2. The Heritage Street Amuse yourself with the magnificent old houses that line this street. There are five houses that you can find here, each dating back to early 1900’s. These houses are surrounded by shady trees that provide ample warmth to lawns and terraces. Two of these houses are the Beckley House, a white Californian bungalow, and Goumond House, a green house that was built around 1930s. 3.  Candlelight Wedding Chapel A small yet a very romantic chapel is Candlelight Wedding Chapel that is not very far from the Heritage Street. It was believed that this chapel had hosted the most number of weddings than any other chapels in just one day! The Chapel was closed in 2003 but was later one reopened in 2009. The Heritage Museum is a great place for the kids and grandkids while you are enjoying great gaming at Nevada’s only all penny casino, The Emerald Island Casino in Downtown Henderson, Nevada.