Why Corned Beef and Cabbage Has Become a Traditional St. Patrick’s Day Meal for Irish Americans 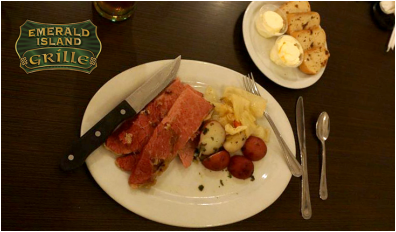 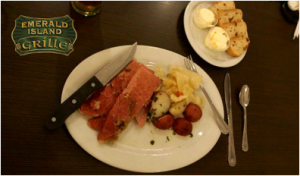 Many take for granted that corned beef and cabbage has become a traditional Irish meal, especially for St. Patrick’s Day. However, the truth is that this tradition started most unexpectedly under a variety of different historical circumstances. If you really want to get to the heart of the matter,

Irish people owe their current love of corned beef and cabbage to the British and European Jewish people more so than any homebound tradition.

To understand how corned beef became associated with the Irish and St. Patrick’s Day in general, read on
Picture
From Bacon to Brisket
​
The truth is that the Irish certainly do love their cows, just not historically for eating. As late as the 1600s, cattle were used almost exclusively for their rich, buttery milk that has formed an Irish tradition in its own right. Bacon and ham was the more common meal, as pigs were cheaper to raise and slaughter.

The British were the ones to introduce the idea of eating beef to the Irish, as “roast beef” had become a symbol of the well-fed English aristocracy. Excited about the grazing opportunities the Emerald Isle could provide, Brits helped spur the market for raising Irish livestock for beef.

For a while, exporting the cattle themselves was lucrative until the Cattle Acts of 1663 and 1667 curbed the number of livestock exports allowed. To skirt around the rule, the Irish would sell the meat instead of the whole cow. They preserved the beef in a British curing process known as “corning,” which referred to large rock salt pieces called “corns.” Ireland’s ability to produce healthy cattle and their cheaper salt prices made corned beef an affordable food product suitable for long-term storage. The rise of the canning industry and the Napoleonic Wars meant that Irish merchants could sell beef to both the French and British, who needed non-perishable, travel-ready meals for their navies and marching armies.

Around the mid-1800s, the market for canned corned beef cooled, but another more serious problem arose. The potato blight caused starvation and job losses by the millions, forcing Irish to flee to America to find economic opportunity. While in America, they had access to better income and cheaper beef than before. They even discovered a new form of corned beef courtesy of all the nearby kosher butchers in New York. This Jewish delicacy was made from brisket rather than roast using a variety of flavorful spices. Thus began the tradition of Irish Americans’ taste for corned beef.

Despite the roundabout beginnings of Irish corned beef, the tradition kept alive authentic, home-cooked food that contains interesting flavors and a good balance of veggies. The Emerald Island Grille offers some of the most delicious corned beef you have ever had, served with a heaping, buttery side of potatoes and cabbage.
St. Patrick’s Day Specials at Emerald Island Grille
Grab a juicy, meaty slice for yourself while you enjoy Nevada’s largest selection of penny slots, video poker and more. There truly is no more exciting or delicious of a place to be near Las Vegas on St. Patrick’s Day!
Enjoy a $9.99 Corned Beef & Cabbage Dinner, Party Favors, Irish Coffee and the chance to win $1,100 bonus dollars on our Wheel of Cash, all day on March 17, 2016. Contact us today for more information on celebrating St. Patrick’s Day in Henderson, Nevada!