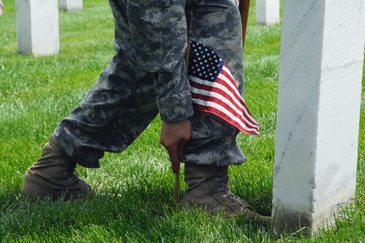 26 May Remembering Our Heroes 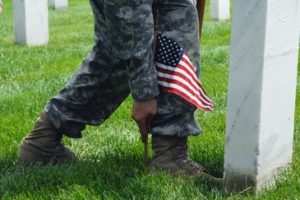 “In Flanders fields the poppies blow between the crosses, row on row,That mark our place…” Lit. Col.  John McCrae, Canadian Expeditionary Force, “In Flanders Fields”. Sadly, for many, Memorial Day has come to be thought of only as part of the “bookend holidays” of summer.  Many people view Memorial Day as the unofficial start of summer and Labor Day as its unofficial end. The Emerald Island Casino would like you join with us and take a moment to remember the true meaning of Memorial Day and reflect on the brave men and women who gave their lives in defense of our country and our way of life.  ​
Memorial Day is a Federal holiday in the United States which is observed every year on the last Monday of May.  It was originally known as Decoration Day, a day upon which the graves of  America’s war dead were decorated with flowers. That tradition is carried on today by families who visit the resting places of their loved ones who served their country and by volunteers and soldiers who place an American flag on each grave in the National Cemeteries.  It is a humbling and stirring experience to see our deceased Veterans honored in such a fashion. Another tradition is the American Legion’s Poppy Remembrance.  In 1915, Lieutenant Colonel John McCrae, a physician with the Canadian Expeditionary Force, wrote the poem, “In Flanders Fields”. Its first stanza refers to the fields of poppies that grew among the soldiers’ graves. In 1920, the National American Legion adopted the poppy as their official symbol of remembrance. Today, the American Legion distributes paper poppies and uses the donations to assist not only Veterans, but also Active-Duty military personnel and their families with medical and financial needs. The staff, management, and ownership of the Emerald Island Casino would like to thank all Veterans and Active-Duty members of the Armed Forces for their service.