We Treat Our Video Poker Players Royally at the Emerald Island Casino!

25 May We Treat Our Video Poker Players Royally at the Emerald Island Casino! 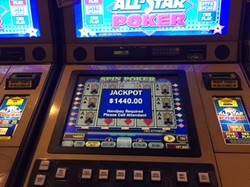 It is thought that playing cards were first invented in Imperial China. Evidence of card games has been discovered which dates back to as early as 9th century. The game we know as poker has evolved from ancient card games and has been influenced by games crossing several continents and cultures. Some historians believe that poker’s origins can be traced to a domino-card game played by a 10th-century Chinese emperor; others claim it is a descendant of the Persian card game “As Nas,” which dates back to the 16th century.
The French game “Poque” and the German game “Pochen” are both thought to be based on the 16th-century Spanish game “Primero,” which featured three cards dealt to each player and bluffing (or betting high on poor cards) as a key part of the game. French colonists brought Poque to North America.  English settlers Anglicized Poque to poker and adopted features of the modern game, including five cards for each player and a 52-card deck.  Soldiers from both the North and South played poker during the Civil War, and it became a staple of Wild West saloons in frontier settlements in the 1870s and 1880s. Poker, as we know it, was introduced to Europe in the 1870s and become more popular, several decades later, thanks to the influence of American soldiers during World War I. Video poker in its primitive form appeared about same time as the first personal computers in the mid-1970s. Today’s leading video poker machines are made by IGT (International Game Technology). IGT had its beginnings as a company named SIRCOMA, which stood for Si Redd’s Coin Machines,   The Draw Poker video poker game was first introduced in 1979. Video Poker is a fun game to play and is less intimidating than playing live poker.  Play begins by inserting cash or a ticket into the machine, placing a bet of one or more credits and pressing the “deal” button. The player is dealt 5 cards.  The player then has the opportunity to discard one or more of cards in exchange for new ones drawn from the same virtual deck or to hold one or more cards. The object of the game is to get the best possible poker hand. A Royal Flush is best hand – Ace, King, Queen, Jack, and Ten of the same suit. After the draw, the machine pays out if the hand or hands played match one of the winning combinations, which are posted in the pay table for the machine.  Pay tables allocate the payouts for hands and are based on how rare those hands are and the game variation.  A typical pay table starts with a minimum hand of a pair of jacks, which pays even money. All the other hand combinations in video poker are the same as in table poker, including such hands as two pair, three of a kind, straight (a sequence of 5 cards of same suits), flush (any 5 cards of the same suit), full house (a pair and a three of a kind), four of a kind (four cards of the same value), straight flush (5 consecutive cards of the same suit) and Royal Flush (a Ten, a Jack, a Queen, a King and an Ace of the same suit). Video Poker players at the Emerald Island Casino can chose from several exciting Video Poker games! We offer dozens of different variations of Video Poker which include Deuces Wild (where deuces are wild cards), Joker’s Wild, (where a joker serves as a wild card), Spin Poker, “Bonus” games (where four aces with a four or smaller “kicker” card pays an enhanced amount) as well as multi-play poker (where the player starts with a base hand, and each additional played hand draws from a different set of cards with the base hand). At the Emerald Island Casino we offer our Video Poker players two exclusive promotions.  Video Poker players can win Wheel Spin Certificates all day on Sundays and Mondays in or Four of a Kind promotion. On those days, when a guest hits a natural four of a kind on any single hand game while playing a minimum of $0.25 per hand, that guest receives a ticket.  When the guest collects six tickets same day, the tickets are exchanged for a Wheel Spin Certificate which allows the guest to return to spin the wheel for up to $100 in BONUS Cash.  Wheel Spin Redemption Days are Wednesdays and Sunday’s from 12 p.m to 8 p.m.   (For complete rules for this and other promotions, see Rewards Center for details). On Fridays, guests who hit a natural Royal Flush on any single hand game that is $200.00 or higher will receive a Wheel Spin Certificate which allows them to return to spin the wheel up to $100 in BONUS Cash. Should the Royal Flush amount to more than $1,000.00, the guests receives a special wheel session that could earn them up to $1,100 in BONUS Cash! The Emerald Island Casino also offers our guests who enjoy playing video reel games an opportunity to win “Double-Double Bonus” Certificates on Fridays and Saturdays from 4 p.m. to 8 p.m.  During those times, guests playing with their Emerald Rewards Cards can win up to three Double-Double Bonus Certificates per week.  A Double-Double Bonus Certificate is awarded when a guest wins a second screen bonus on a $.01 denomination video reel game of $75.00 or more. Double-Double Bonus Certificates allow guests to play special video poker tournament machines for a chance to win up $200 dollars!  Video Reel Double-Double redemption days are Thursdays and Sunday’s from 4 p.m. to 8 p.m. We appreciate are loyal Video Poker players!  Thank you for helping to make the Emerald Island Casino the Locals’ #1 Choice Since 2003!