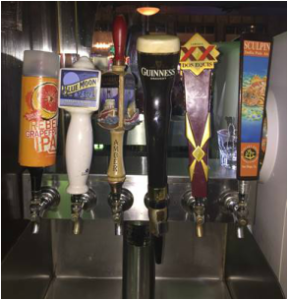 Beer is quite likely the world’s most popular,  and, oldest, alcoholic beverage.  As the temperatures in Henderson start climbing over the century mark, doesn’t  an ice cold glass or frosty bottle of beer sound really, really good?  We think so and that’s why we take our beer selection very seriously at the Emerald Island Casino.  ​
For many years, there were very few beers that were commercially available.  In recent years, microbreweries have sprung up all over the world.  A microbrewery or craft brewery is a brewery that produces small amounts of beer.
​
Their production is typically much smaller than large-scale corporate breweries and they are independently owned. Such breweries are generally characterized by their emphasis on quality, flavor and brewing technique.  Water Street’s own Lovelady Brewing is a great example of the modern microbrewery!

The micro brewing movement began in the England in the 1970s (although traditional artisanal brewing have existed in Europe for centuries) and subsequently spread to other countries. The craft brewing phenomenon has taken off and  breweries have quickly expanded their production and distribution.Craft brewing has really become popular in America.  In the 1970s American lawmakers made changes to U.S. law that laid the foundation for the expansion of craft brewing. The 1978 Carter Home Brewing Act allowed for small amounts of beer and wine to be produced at home and in 1979 President Carter signed a bill to deregulate the brewing industry which made it much easier to start new commercial breweries.
At the end of the 1970s, there were as few as 89 breweries in the United States. Today, it is estimated that there are over 3,000 breweries in production, most of which are craft breweries!There are many styles of beer including  Brown Ale, Red Ale, Pale Ale, India Pale Ale, Stout, Wheat beer, Lager, Pilsner, Lambic, and  Bock, to name a few. The alcohol by volume content in beer can range from 4% to as high as 20%!  Many beers are now flavored with fruit and savory flavors and even hot peppers!

At the Emerald Island Casino we are proud to serve our guests a large selection of bottled beer and great brews on tap.

For a real treat, try one (or two!) of our  beers on tap.  We have some great brews for beer lovers!
We have Alaskan Amber Ale, Dos Equis Amber, Guinness, Rebel Grapefruit IPA, Blue Moon and, our favorite, Ballast Point Sculpin.   We also have Stella Artois on tap. We even have a custom tap that keeps the Stella at the perfect temperature of 37 degrees.

At the Emerald Island Casino you are always welcome to stop by on a hot day or night, have fun playing some of our penny slot machines and enjoy an ice cold beer! Cheers!