To Gnome or Not to Gnome? 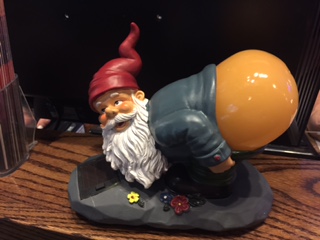 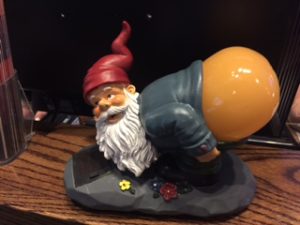 They are exceedingly popular lawn adornments… They are banned by many home owners’ associations in the United States. They are often credited with mysterious abilities to help gardens flourish… Participants in home and garden shows in Britain are disqualified if their gardens display one. Rare or antique versions are highly prized by collectors.  They are often “liberated” from their garden homes and freed into surrounding forests. ​ In 2008, a French man was arrested on charges of having stolen over 160 of them… On most Thursday Gift Days you can get one of your very own at the Emerald Island Casino!!! What are they?  Garden Gnomes!
Love them or hate them, the Garden Gnome has a long history.  Some scholars have suggested that the garden gnome is a descendant of the Greco-Roman fertility god Priapus.  Statues of that god were often found in ancient gardens. Others believe that they are representations of Gnomes from folklore and myth. Ancient tales about Gnomes say they are mythical, elemental spirits of the ‘Earth’ element (the other classical elements being: ‘Water,’ ‘Fire,’ and ‘Air’).  Gnomes, it is said, wear conical hats and move through the earth itself as easily as we humans walk upon it.  Legend has it that if any of these underground creatures are caught out in the daylight, the rays of the Sun turn them into stone!Their popularity can be traced to myths that they have magical powers to protect or punish people or to reward them with happiness.  Much like Leprechauns, some believe them to be guardians of secret underground treasures – including gold! Be it fantasy or fact, there are even some today who believe that they can control the  hidden processes of plant life.  In fact, many farms, including prize-winning vineyards, follow principles based on those beliefs. Garden gnome statues as we know them today were first created in the mid-1800s in Germany.   The first garden gnomes were molded from terracotta clay.  The clay was poured into molds, then dried, fired in a kiln, and finally painted.  Today, most Garden Gnomes made of resin or plastic and are mass produced abroad. Modern depictions of gnomes usually emphasize their bright red pointed hats, solid colored clothes, and long white beards.   Very few gnomes are girl gnomes! Do Garden Gnomes make you smile or cringe? Do you adore them or do you abhor them?  We’d love to know your thoughts about gnomes!!! Come visit the Emerald Island Casino, the gnome, er, home, of Nevada’s Only All Penny Casino!!! ​