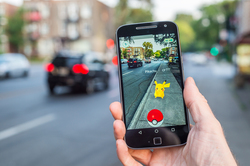 The Emerald Island Casino and our friends on Water Street have even more new neighbors…Pokémon!

The basic concept is that the world is filled with millions of little pocket monsters.  The player is a Pokémon “trainer” who must travel around the world, “catch them all” and battle other “trainers” for prestige.

The newest adaptation is Pokémon Go which is a mobile app for smart phones. The game is an augmented reality game which has rapidly become a global phenomenon and was been downloaded by more than 100 million people worldwide.

In the game, players hunt for wild Pokémon.  They visit Pokémon Stops where they are awarded “balls” which help them capture Pokémon, eggs from which to hatch their own, and medicines to heal their Pokémon after battle.  They also visit “gyms” where they and their Pokémon battle other teams for points and power.

A few of the Pokémon Stops on Water Street include: the Henderson Detention Center, the Dolphin Fountain, the Coffee House, the Water Treatment Plant and numerous historical markets and art installations.

If you play Pokémon Go, you know that Water Street is a great place to collect balls and other items as there is a high density of Pokémon Stops in the area.

If you don’t play, and even if you think it is the stupidest thing ever, you should still be aware of the craze. Ideally, the goal is for players to walk and explore their cities.  The game been credited with increasing physical activity, bringing people out to public parks, allowing neighbors to get to know one another and helping businesses grow.  However, it has also attracted controversy for contributing to accidents and becoming a public nuisance at some locations.

For the most part players are friendly and polite and include people of all ages and walks of life.  While the game expressly warns players not to go into dangerous places, not to trespass, to be aware of their surroundings and to never play while driving, some people don’t follow proper etiquette!

Unfortunately, some bad players go up and down Water Street while driving, stop suddenly and are not watching where they are going.  Some pedestrians who are playing are similarly inattentive to what is happening around them.  So be careful and be on the watch for distracted players!  Be sure that the Henderson Police are on the lookout for distracted drivers.

Even though the Emerald Island Casino is a Pokémon Stop free zone, many wild Pokémon are spawned here! If you need a break from trying to “Catch Them All” or just trying not to get caught up in the fad, the Emerald Island Grille is a great place to relax, enjoy a cold beverage and great meal (and maybe catch a few).

Who knows, maybe someday Pokémon will become a slot machine title and join all of your other favorite games at the Emerald Island Casino, Nevada’s Only All Penny Casino!!!