WHO KNEW THAT “HOLLYWOOD” DOUG WAS SUCH AN AMAZING ARTIST? 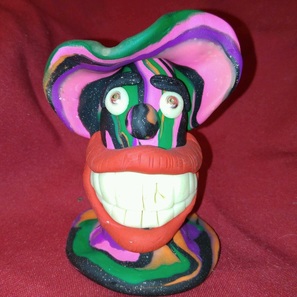 20 Oct WHO KNEW THAT “HOLLYWOOD” DOUG WAS SUCH AN AMAZING ARTIST?

With the ready smile and a cutting wit, Doug is a familiar face at the Emerald Island Casino.  Doug is celebrating his 10th year with us!  He describes his role as a do “whatever is needed team member”. What most people don’t know is that Doug is a talented artist who both paints and sculpts.
Doug was born in New York City and raised in Miami, Florida. He proudly served his country in the United States Air Force and enjoyed postings in Germany, Italy, Spain, and Japan. In addition to traveling abroad, Doug had a great opportunity to attend courses at the University of Miami, University of Madrid, New York University, Los Angeles City College and UCLA.  His course of study included art history, photography, cinema history, cinema production and marketing and cinematography. Doug’s artistic talents aren’t limited to painting and sculpture. He has worked in film productions as a minor actor, assistant camera operator, assistant director, art director and motion picture marketing. Doug’s bright and emotive paintings and charming sculptures are truly a joy to behold. The whimsical little guys (whose eyes and smile glow-in-the-dark) have even been collected by celebrities including Hugh Hefner and their big smiles have adorned with the Playboy Mansion. Who now knows what a great artist Doug is… You do!  Feel free to ask Doug as he would be pleased and proud to show you pictures of his artwork. Thank you Doug for your 10 years of service!  Beat wishes for continued success with your artistic endeavors from your friends at the Emerald Island Casino – the Jewel of Henderson.