﻿SANTA PUT AN ORANGE IN MY STOCKING!! 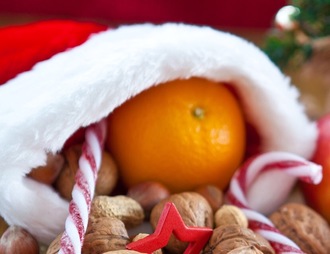 13 Dec ﻿SANTA PUT AN ORANGE IN MY STOCKING!! 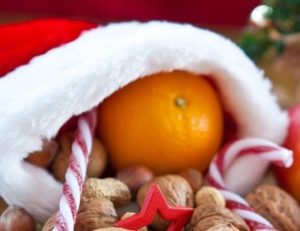 Christmas is one of, if not the most joyous of all holidays. Families and friends gather together to celebrate the season and one another.  Christmas joy radiates from time honored traditions, some of which have meanings that have been lost or blurred over time.

In most traditional Christmas stories, the contents of the Christmas stocking were the only toys that children received at Christmas from Santa Claus.  Children who behave badly during the year are threatened that they will receive only a piece of coal in their stocking.

While the origin of Christmas stockings may have escaped a written record, there are popular legends that attempt to tell the history of this Christmas tradition. One such legend may explain why a traditional stocking stuffer is an orange.  The story goes that long ago, there lived a poor man and his three pretty daughters. The man had no money for his daughters dowries.  St. Nicholas was passing through the man’s village when he heard the villagers talking about the girls. St. Nicholas wanted to help, but he knew that the old man wouldn’t accept charity. He decided to help in secret. After dark he threw three bags of gold through an open window, one landed in a stocking left to dry by the fire. When the family awoke the next morning they found the bags of gold. The girls married and lived happily ever after.

Sometimes the story is told with gold balls instead of bags of gold. Which is why three gold balls, sometimes represented as oranges, are one of the symbols for St. Nicholas and why many families always put an orange in the toes of their Christmas stockings.

Another explanation for an orange as a stocking stuffer is that during the Great Depression of the 1930s, money was tight, and many families simply didn’t have the ability to buy gifts. It truly was a treat, even a luxury, to find things like a sweet orange or some walnuts in your stocking on Christmas.

In America, stocking stuffers have changed over the years.  In the early 20th Century, an orange, a peppermint stick, a few pennies, a ball and jacks or marbles, or a homemade doll would have thrilled a child, but that has certainly changed!

Some of the Emerald Island Casino team members remember their favorite stocking stuffers:  packs of baseball cards (the ones that still had the gum in them), Beanie Babies, hair barrettes, cap guns, make-up, gift cards, 8-tracks,  cassettes and CDs (for those of you under 25 – think ITunes cards), DVDs and Blu-ray Disks (again think Digital downloads), movie tickets and candy.

At the Emerald Island Casino we can certainly help stuff your stockings!  You can use your Emerald Island Rewards points for great stocking stuffers!

How about a gift voucher from one of our many vender partners? Movie tickets from Regal Movie Theaters, Christmas cookies from Chef Flemming’s Bake Shop or even baseball cards from Sports Collectibles Plus?
Put some bulk into that stocking with a package of officially delicious beef jerky from our exclusive vendor partner Big Meat beef Jerky.  Some other great stocking stuffers from the Emerald Island Rewards Center include Emerald Island Casino knit caps, pretty rings, watches, or necklaces, pretty ceramic ring boxes and Christmas ornaments.

Plus, don’t forget there are still a couple of Gift Day Thursdays before Christmas!  Watch the gift table for some great stocking stuffer ideas for kids young and old!
​
What are some of your favorite stocking stuffers from your childhood?  We would love to hear from you and look forward to seeing you at the Emerald Island Casino – Where Every Day is Promotion Day!