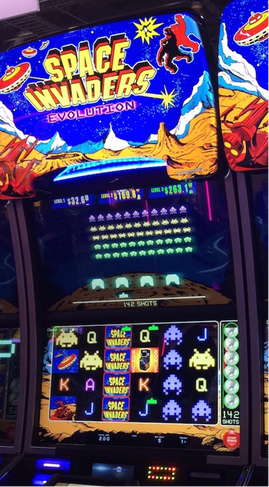 Over the past several years, the Nevada Gaming Commission has been studying skill based gaming and carefully crafting legislation to regulate this exciting and innovative new gaming experience.  The new regulations allow a game’s outcome to be determined by the application of chance, the skill of the player, or a combination of skill and chance.

​
Traditionally, slots wagers must be determined entirely by a machine’s random number generator. By contrast, skill-based slots would allow players to increase their chances of winning depending on how well they perform a video game-like task.

“Skill-based” slot machines are meant to appeal to the young and young at heart.  Some of the first such games that are rolling out soon will include familiar video arcade game titles that we all fondly remember!  These fun new games will give players a totally new gaming experience!  For the first time players will be able to influence the outcome of a reel type game.

At the Emerald Island Casino we are very proud and excited to announce that we will be on the leading edge of this new development in gaming and will be amongst the first to offer our players the chance to play the newest games!!!

Space Invaders Slot Machine from Scientific Games is coming soon to the Emerald Island Casino!  The game, which won gold for “Best Slot Product” in the skill-based slot game category at the 2016 Gaming & Technology Awards, combines all the classic 80’s arcade fun with the thrill of a real slot machine!

Regular play on the machine plays like a regular slot game, but once you enter the bonus round, players can choose between luck-based or skill-based options! When a player picks the skill-based bonus, the Space Invaders Slot transforms into the classic arcade game!

The original arcade version of Space Invaders was created by Tomohiro Nishikado and was released in 1978. It was originally manufactured and sold by Taito in Japan, and was later licensed for production in the United States by the Midway division of Bally.  Space Invaders is one of the earliest shooting games and the aim is to defeat waves of aliens with a laser cannon to earn as many points as possible.  The game became an icon when it was popularized on the Atari gaming platform.