Thank you Mayor Andy Hafen for your commitment to the City of Henderson!

25 May Thank you Mayor Andy Hafen for your commitment to the City of Henderson! 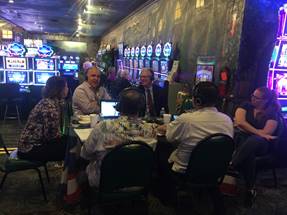 Mayor Andy Hafen recently visited the Emerald Island Casino with the Alan Stock Show (KXNT 840AM) that broadcasts here live on-air once a month.  He is and has been a huge supporter of Downtown Henderson and its redevelopment, including the renovations at Emerald Island, Water St. District and surrounding areas. Mayor Hafen was elected in 2009 and then re-elected in April 2013 as the city’s 12th mayor.

He has served our community in numerous ways such as  Henderson City Councilman, Southern Nevada Heath District Board of Health, Las Vegas Medicine Community Advisory Board, Henderson Chamber of Commerce Board of Directors and Henderson Redevelopment Agency, to name a few. ​

​In 2009, we enclosed our patio to bring you 42 additional gaming machines. In 2014, we remodeled the Emerald Island Grille to double the seating capacity. Last year, we updatedour guest restrooms. Currently we are installing a second set of guest restrooms near the current Rewards Center along with 50 additional gaming machines and an expanded Emerald Rewards Center.

Mayor Hafen has announced his retirement at the end of his term this year on June 20th. As our friend and colleague, we wish thank Mayor Hafen for his years of public service and all the best in retirement and as always and most importantly, many thanks to you our valued guests.