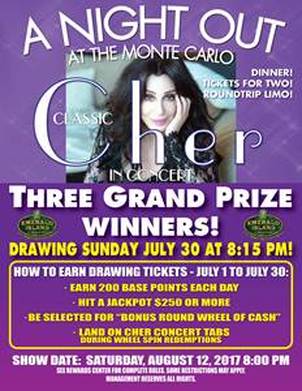 At the Emerald Island Casino Every Day is Promotion Day. All of our promotions are fun and rewarding for our guests, but, on some days, the promotion are, well, just awesome!
On Sunday, July 30th at 8:15 p.m., three lucky winners will be drawn from tickets awarded beginning on  July 1st to experience the incomparable Cher live and in concert!
Three Grand Prize Winners, and their guests, will join two of your favorite Emerald Island Casino hosts for an unforgettable evening.  This very special night out will start with a delicious dinner at the Emerald Island Grille, luxury limousine service to (and from) the Monte Carlo and great seats for the 8 p.m. show!

It is fun and easy to win drawing tickets for this great promotion.  All you need to do is:

Everyone knows this dynamic performer but do you know these thirteen
facts about Cher?

​​​Cher is one of those amazing performers who just seems to get better and better as time goes by, just like the Emerald Island Casino – the Locals’ Favorite All Penny Casino Since 2003!