LIVE FROM HENDERSON AT THE EMERALD ISLAND CASINO!!!

06 Sep LIVE FROM HENDERSON AT THE EMERALD ISLAND CASINO!!! 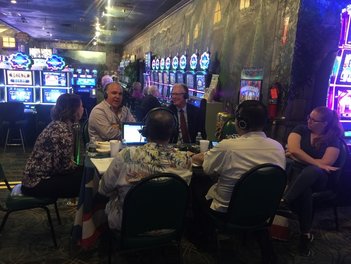 ​On one Wednesday of each month, from the hours of 3p.m. to 6:00p.m., a small corner of the Emerald Island Casino floor is transformed into the remote broadcast studio of CBS KXNT’s Alan Stock Radio Show.  Emerald Island Casino is pleased to partner with Alan and KXNT News Radio 840 to produce the three hour program.  If you haven’t had the pleasure of listening to the broadcast, do yourself a favor and tune in this coming Wednesday, June 14th, 2017,

to hear Alan along with Emerald Island Casino co-owner and General Manager Tim Brooks as they interview Clark County Sheriff Joe Lombardo and Steve Sisolak, Clark County Commissioner (District A) and Chair of the Board of County Commissioners on a variety of issues of interest to residents of Clark County.
KXNT News Radio 840 AM is the dominant news and talk radio station in all of Southern Nevada. KXNT boasts the largest radio news department in Las Vegas and draws from reliable and dependable sources such as CBS News and Bloomberg.

Alan Stock is the one of the most popular talk show host in Las Vegas and is considered one of the 100 most influential talk radio hosts in the country.  Alan is an inductee into the Nevada Broadcasters Association’s Hall of Fame and in July of 2015, Newsmax named Alan as one of the Top 50 local talk show hosts in America.

Alan graduated with a Bachelor’s Degree in Psychology from Sonoma State University and a Master’s Degree in psychology from California State University at Dominguez Hills.  After working in the field of psychotherapy for 10 years, he began his radio career which has taken him from Santa Rosa to San Diego, Sacramento and San Francisco.  In June of 1999, Alan was hired as the afternoon drive time host at KXNT.

​We would love to have you join us at the Emerald Island Casino during the broadcast and observe the making of a live radio remote broadcast!  You might enjoy listening to and observing the off-air exchanges between the host, his on-air producer, the sound tech and guests.