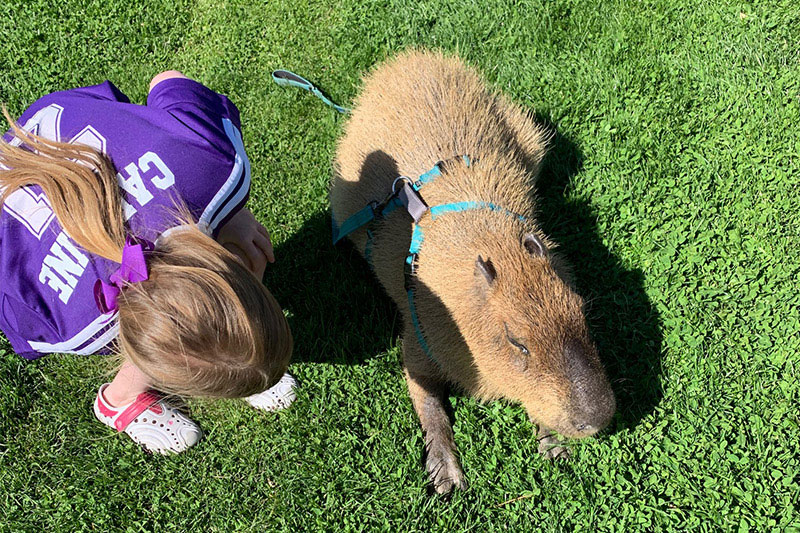 The Water Street District in Downtown Henderson sprang up during World War 2. Downtown businesses served the needs of workers at the Basic Magnesium plant and the townsite homes in downtown were built in the 1940s to house the workers and their families. Many of the residents in Downtown Henderson are the descendants of those early families.

But, did you know that there are still residents of the Water Street District who have here since Henderson was, well, the desert? For an urban area, the downtown district was a wide variety of native and not so native wildlife! If you are up early or out late you just might see some of the fury and feathered residents of downtown!

Of course, there are pigeons and mice and other nuisance animals. And, right now we have a rare infestation of grasshoppers which will return to normal rates in a couple of weeks. But, in addition, to those pests there is a diverse population of animals in the downtown.

Some call them cute and gardeners call them pest, but there are at least three types of rabbits in downtown. Some are domestic and crossbred bunnies that originated as domesticated pets. There are also Cottontail rabbits (Botanically known as Sylvilagus audubonii) as well as the larger Jackrabbits (Lepus californicus), also known as the American desert hare). Both can be seen scurrying across streets and under bushes in the early morning and late evening.

When you see a bird that looks like it is jogging across the street it is likely either a Gambel’s quail ( Callipepla gambelii) or a California Valley Quail (Callipepla californica). Birds that are said to be running on the road are Roadrunner (geococcyx californianus). It is a member of the Cuckoo family (Cuculidae). When the roadrunner senses danger or is traveling downhill, it actually can fly, revealing short, rounded wings with a white crescent. But it cannot keep its large body airborne for more than a few seconds, and so prefers walking or running (up to 17 miles per hour) usually with a clownish gait.

Of course, if you have rabbits and birds (and outside house cats in the desert) you are also going to have coyotes (also known as the prairie wolf or brush wolf, Canis latran)! These clever animals can sometimes be seen running through surrounding neighborhoods after a night of hunting.

Of course there are many types of other birds including dove, black birds, humming birds and owls. There are also many types of bats in the area as well.

But, perhaps the strangest animals of all in the Water Street District are a pair of Capybaras which live in the townsite with their humans. If you are lucky you might spot them out for a walk with their people on a leash at a local park you are in for a treat. The capybara (Hydrochoerus hydrochaeris) is a mammal native to South America. It is the largest living rodent